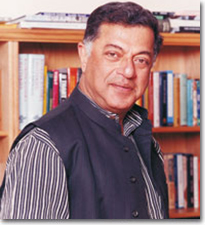 Girish Karnad is a playwright, film-maker and actor. He writes in Kannada, the language of the State of Karnataka and has translated his plays into English. Some of his more recent plays however were written originally in English.

After working with the Oxford University Press for seven years (1963-70), he resigned to freelance. He has served as Director of the Film and Television Institute of India (1974-1975) and Chairman of the Sangeet Natak Akademi, the National Academy of the Performing Arts (1988-93). During 1987-88, he was at the University of Chicago as Visiting Professor and Fulbright Playwright-in-Residence. Most recently, he served as Director of The Nehru Centre as well as Minister of Culture, in the Indian High Commission, London (2000-03).

His play, Hayavadana (1971) won the Sangeet Natak Akademi Award. The Oxford Dictionary of Plays, edited by Michael Patterson (2005), lists it among the ‘most significant plays of world theatre’. Naga-Mandala (1988) was premiered in the US in 1993 by the Guthrie Theater, Minneapolis as part of its Thirtieth Anniversary Celebrations, which then commissioned The Fire and the Rain. In 2002, the Haymarket Theatre, in Leicester, UK, commissioned and premiered Bali the Sacrifice.

He was invited by the International Theatre Institute of UNESCO, Paris to deliver the World Theatre Day Message on 27 February 2002. In 2008, the Institute honoured him as World Theatre Ambassador.

He scripted and presented the film, The Bhagavad Gita, as part of the series, ‘Art that Shook the World’, for B.B.C. Two in 2002.

The Karnatak University conferred a D.Litt. on him in 1994.

He was awarded the Padma Shri in 1974 and the Padma Bhushan in 1992 by the President of India.

He has received the Bharatiya Jnanpith, the country’s highest literary award, in 1999.

His first film Samskara, for which he wrote the script and played the lead role, was initially banned by the censors and, when released, went on to win the President’s Gold Medal. His next film, Vamsha Vriksha (Family Tree), which he wrote, directed and acted in (along with B.V.Karanth) received the National Award for Excellence in Direction. The third film, Kaadu (The Jungle), won the President’s Silver Medal. Shankar Nag, who was introduced by Karnad in his Ondanondu Kaaladalli (Once Upon a Time,1977), won the Best Actor Award at the International Film Festival, New Delhi. Subsequent films, such as Kanooru Heggadithi (2000) in Kannada and Utsai,based on the Sanskrit play, Mrcchakatikam (The Little Clay Cart), in Hindi, have won national awards and participated in international film festivals.

He has also written film-scripts, of which Bhumika won the National Award and Godhuli (along with B.V.Karanth) the Filmfare Award (1979).

He has acted in the films of Shyam Benegal and Nagesh Kukunoor as well as in the television serials of Satyajit Ray and Mrinal Sen.

He has served as a member on the Jury for the International Film Festivals in New Delhi (1977) and Locarno (2003).

He has two children and lives in Bangalore with his wife.