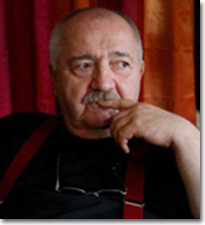 Born in Georgia, in 1938, Robert Sturua studied under Mikhail Tumanishvili at the Tbilisi State Theater Institute. He graduated in 1961 and began his career at the Shota Rustaveli Theater, where he became director in 1979 and artistic director in 1982. Sturua is known as paradoxical interpreter of the Shakespeare’s theatre. "Hamlet" (1986) was staged for the Riverside Studio in London, with Alan Rickman as Hamlet, and became hailed as one of the ten best Shakespearian productions of the last 50 years, by the Shakespeare International Association. In the turn of the 90’s, Sturua's productions turned to the inner world with works including "Life is a Dream" by Calderon (1992), "Kind Woman of Sezuan" by Brecht (1993) or "Lamara" by Grigol Robakidze (1996). He acquired a philosophical tone and focused more on the fine line between life and death. The metaphorical language of recent interpretations is poetic and includes the fantasy "Styx", inspired by the music of Giya Kancheli (2002). Robert Sturua’s creative world is rich and diverse. His productions harmonize the tragic and the comical, the political farce and the melodrama, the classical comedy and the philosophy, where extreme rationalism can echo the grotesque. Sturua’s production were worldwide performed from Argentina to Australia, from Edinburgh to Jerusalem.