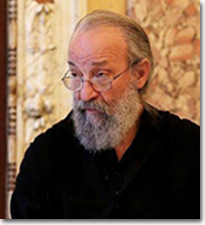 Anatoli Vassiliev is an internationally acclaimed theatre director and professor of Russian Theatre. He is the founder of the Moscow Theatre School of Dramatic Arts initially located on Povarskaia road, then relocated in a new building on Sretenka road. It is an architecturally original space, conceived according to Vassiliev's plans for the purposes of theatrical research to which it is dedicated.

He has taught many times at the Lounatcharski State Conservatory of Dramatic Art (GITIS), the VGIK Moscow Institute of Cinema, and the ENSATT (École nationale supérieure des arts et techniques du théâtre) in Lyon. He is considered to be the greatest Russian director of his generation.

In 1968 Anatoli Vassiliev enrols in GITIS and studies with Andrei Popov and Maria Knebel. In 1973 he starts working in the Moscow Art Theatre where he adapts Osvald Zagradnik's A Solo for a Clock with Chimes. From 1977 onwards, he works at the Stanislavski Theatre under the leadership of Andrei Popov. He gains recognition with the stage adaptation of Maxim Gorki's The First Draught of Vassa Zheleznova, and The Grown Daughter of a Young Man, by Victor Slavkin.

In 1982 he is invited by Yuri Luybimov's Taganka Theatre. His performance Cerceau, is recognized as the best adaptation in 1985. During the 1980s he begins to teach classes for script writers and film directors.

He establishes his theatre, the Dramatic Arts School, in 1987. The theatre's first performances take place in the basement of the Povarskaia road building, north of the Arbat district in the centre of Moscow. The company's inaugural season is launched on February 24th 1987 with Luigi Pirandello's Six Characters in Search of an Author. Together with Cerceau that Viktor Slavkin wrote specifically for the company, both productions tour in Western Europe for the first time in 1987-1988 His school becomes a laboratory for experimentation on the voice and body of the actor. Anatoli Vassiliev dedicates himself in the mise-en-scene of non-theatrical texts in order to interrogate their orality and literary value.

Having been musically educated himself, Vassiliev often returns to music in his work. Having studied in depth the structures of the play through the methodology of the «etude» he is interested in the ways the inner life of an idea can be manifested through the verb. He studies the materiality of sound, the intonation, looking to put the words into movement: the sound must become flesh.

Anatoli Vassiliev gradually gains international reputation. In 1992 he stages Lermontov's Masquerade in the Comédie Française, and the next year, in Rome, Pirandello's Each in His Own Way. In 1997 his Lamentations of Jeremiah is performed in the Avignon festival and in Italy and Berlin. The performance receives Russia's national Golden Mask prize for best performance and best scenography. In 1998 he presents Pushkin’s Don Juan or the Stone Guest in the Cartoucherie.

On May 4th 2001, his company moves to the new building of Sretenka road, built according to the plans by Vassiliev and Igor Popov, Boris Tkhor and Sergei Goussarev. The structure of the new building with its two stages (The Manege and The Globe) and its large glass windows, is considered to contribute to the atmosphere of an artistic laboratory to which its creators aspire.

In 2005 he stages Medea Material again at the Theatre des Amandiers in Nanterre. In 2006 he presents From the Voyage of Oniegin, adapted from Pushkin and Tchaikovsky at the Odeon theatre and he is invited by Avignon festival to present Mozart and Salieri and The Iliad.

In 2006, following a conflict with Moscow's administrative authorities, Vassiliev leaves his position at the School of Dramatic Arts and moves to Europe. He works in Paris, Lyon and London. Three years later he is invited by the director of the Bolshoi Theatre to stage an adaptation of Don Giovanni.

In 2010 Vassiliev launches a three year course for the training of theatre educators. The course, based in Venice, runs for two months each year and is targeted primarily to Italian professionals although it attracts also educators, actors and directors from all over the world. In 2011, at the Grotowski Institute in Wroclaw, Poland, Vassiliev launched a research seminar on acting techniques. The seminar lasted 2 years and brought together graduates of the Venice course alongside actors from various European countries.

In March 2016 Vassiliev directs Marguerite Duras' La Musica Deuxième, in the Comédie Française in Paris. He is assisted by his long-time collaborator Natalia Issaeva, translator and theatre researcher, and by Boaz Trinker, a specialist in actors' training.